Resolve to Stick to your Resoltuions This year...by Heather at Inspiration Cafe

Hi guys, it's my turn over at Inspiration Cafe, come check out some of my resolutions and how I am planning to stick to them this New Year.


"Hi everybody, it's Heather here from The Beating Hearth and I am going to talk about something we're all going to have on our minds in about...oh, I don't know, depending which hemisphere you hail from, 8 or so days.

To some, that's a dirty word.  Many people resolve not to make resolutions.  But, I like them.  I like the idea of being able to make myself a better person starting....NOW!

So, here's some of my resolutions...and some tips on how to make them a little easier to stick with. 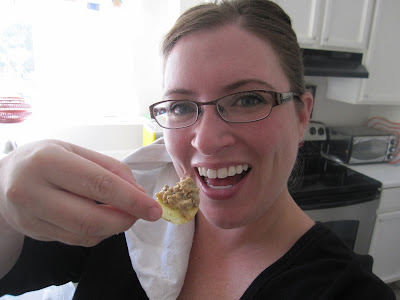 Yeah....the dreaded one.  But one that is so important!  Okay, so here it is.  I have lost 60 or so lbs, back in the day, and I maintained it until I had baby #2.  So, this is one of my resolutions this year because I need to lose...60 lbs again.  I am back where I started.  Ugghhh!!!  What have I learned about losing weight?"

Please click here to read more...
Posted by Heather @ The Beating Hearth at 9:12 AM No comments:

Check out Mel's super cute Christmas decorations over at Inspiraton Cafe.  She is so clever...and has never seen a snowman in real life!! 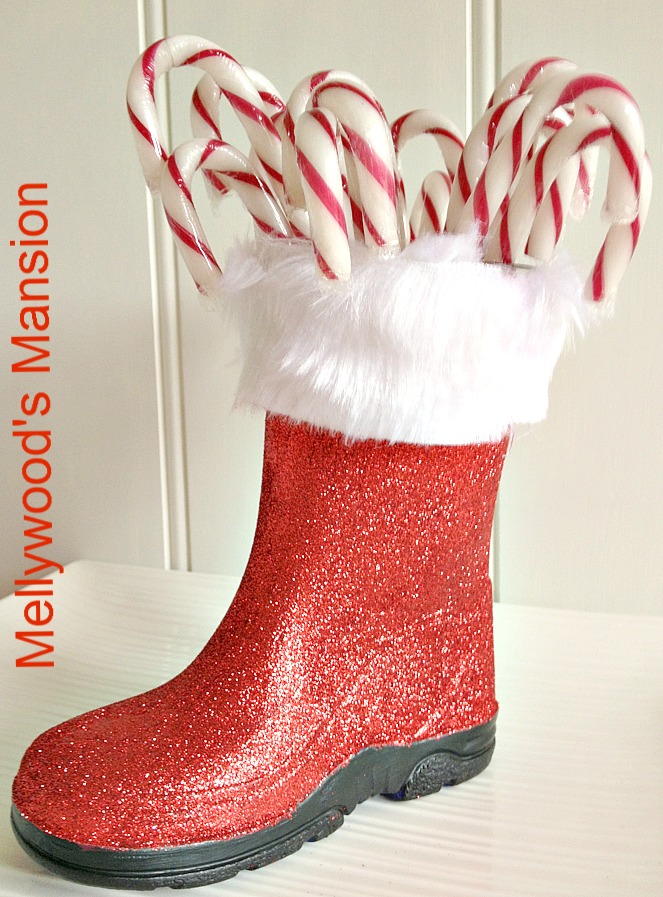 Easy Holder for your favorite photos...Guest post by Danni from Silo Hill Farm

Thank you so much Danni!!  This is gorgeous and I think it would be the perfect present for somebody who works in an office and likes to display favorite photos, or as a cute display on a mantle or hutch.

Everybody, definitely check out Danni's blog over at Silo Hill Farm you won't regret it, she's amazing!


Hello fans of The Beating Hearth!  I'm Danni from Silo Hill Farm and I'm excited to be doing a guest post for my good friend Heather today! 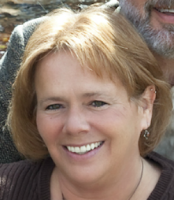 I wanted to share with you how easy it is to make this cute little wire photo holder. 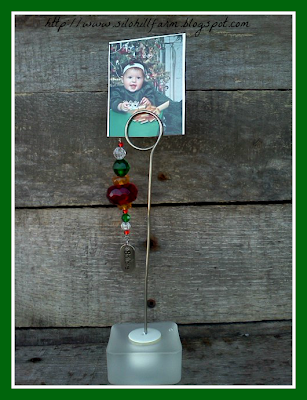 Let me tell you about the supplies I used. 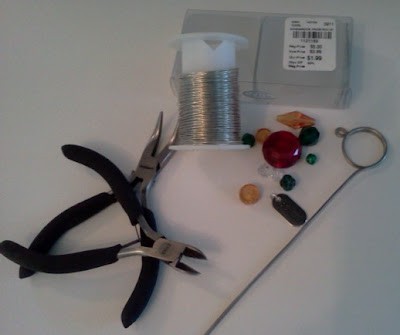 Bent nosed pliers, Wire Cutters, Beads, Thin Wire, Base, Wire Photo Holder, Small Charm
(Not Pictured...sm. amount of clay, single hole button)
The base that I used is actually a taper candle holder that I picked up on a clearance shelf.  A pack of 2 was $1.99.  You could use just about anything that will hold a wire though. (I considered an empty  thread spool.)
The wire photo holder came from a thrift store.  There were like 12 of them stuck in some kind of heavy base.  I clipped them off to use individually.  I see them at all most every thrift store I've ever been in, in some form or another.
I'm not a jewelry maker by any means, but I have learned a few things.  I cut a piece of wire and made a wrapped loop in one end. 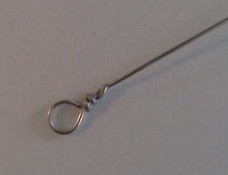 Then I opened the jump ring on the charm I wanted to use and closed it back around the loop I had just made. 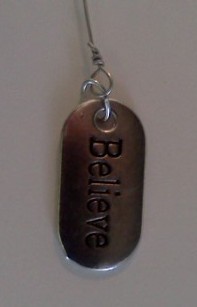 Add the beads on to the open end of the wire and then make another wrapped loop around the end, fastening it on to the wire photo holder. 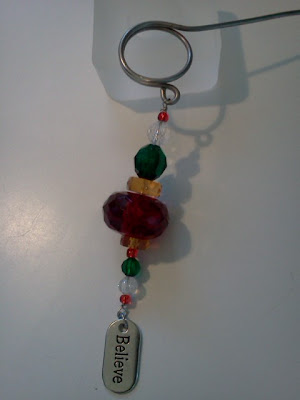 To make the wire stand up in the candle holder, I made a little ball of clay and pressed it down into the opening where the candle goes... 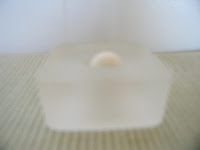 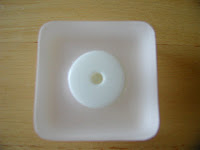 I just stuck the wire down in and the clay held it upright just fine.  Now all I needed was a cute picture to put in it and I was done! 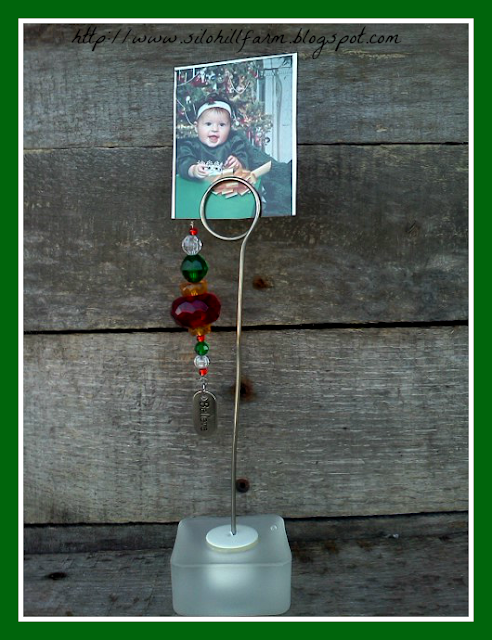 I did this as a Christmas project, but you could use any beads and charm and make it into something else.....
How about this one with pearls and a "love" charm as a wedding or anniversary gift?

Thank you so much Danni!! This is gorgeous and I think it would be the perfect present for somebody who works in an office and likes to display favorite photos, or as a cute display on a mantle or hutch.

Everybody, definitely check out Danni's blog over at Silo Hill Farm you won't regret it, she's amazing!

Thanks for reading!
Posted by Heather @ The Beating Hearth at 12:00 AM 3 comments:

The Most Wonderful Soup of the Year! 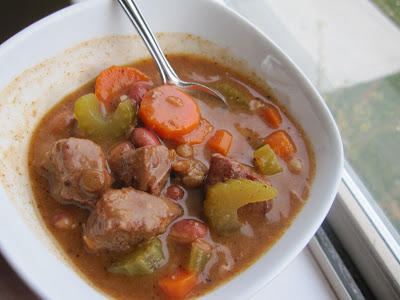 I am working hard on becoming more of an intuitive cook.  This practice lends itself well to the making of soup.  I mean, what is soup but whatever you have on hand and water?  I know my Great Grandmothers wouldn't have given the making of soup a second thought, they would've just done it, dang it. They were hardy women who knew how to feed and clothe eight kids on a miner's pay. Warshed their clothes on a warshboard ever' day. The work they done was hard, at night they'd sleep cause they were... tard...

Oh wait, that's somebody else's story, but you get the drift.  I shouldn't have to give soup as much thought as I do.  So, instead of googling a recipe, I did what felt right. And dang was it good!

If you don't have some of the ingredients I used, figure something else out.  It's okay, I promise.  Lets be pioneer women... errr.... you know, the old school kind. Not the super-fancy blogger who takes pictures of every blooming step.  I'm just saying, I think we can pull up our big girl panties and just follow directions. Sorry. Sometimes I think we don't need pictures of every single step.

The quantities I give here are what I used, but don't fret them too much.  It's okay to use more or less of something. 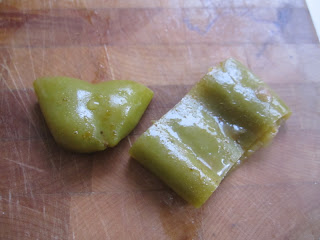 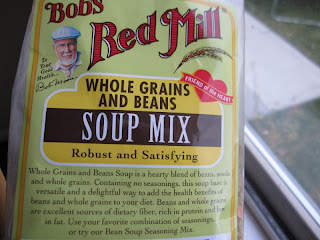 The soup mix I used.  It was awesome.  Imagine all the beans, lentils, barley and GROATS. It's got all of the things. 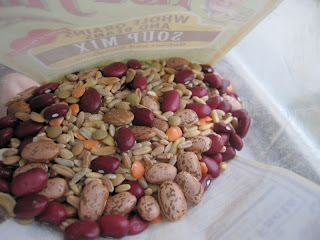 1 1/4 lb. Chuck cut into 1 inch pieces
1/2 C. Seasoned flour.  I used some garlic salt and pepper for seasoning
1 onion, diced
5 medium sized carrots, cut into coins
3 ribs celery, chopped
1 8 oz can tomato sauce, mine was seasoned with basil, garlic and oregano
Few dashes Worcestershire Sauce. Don't go crazy here.
Chicken Base, about 2 Tbl.  You could use bouillon cubes if that's what you've got
Parmesan rind (I was seriously being fancy.  But, I love that my grocery store sells what is basically garbage. And I bought it and loved it!)
1/2 Anaheim Pepper cut into large pieces. I happened to have 1/2 of an Anaheim pepper, but absolutely loved the flavor it imparted to the soup.  I didn't want to actually eat pieces of pepper, I just wanted the essence.  That's the reason for the big chunks, you're going to fish them out at the end.
1 1/2 Cups Mixed beans and grains Soup mix (not seasoned, just the beans and grains)
Water. A bunch of it. You'll have to use your judgement on this one.  You want to have your pot filled about 2 inches from the top.
salt and pepper
Oil

In a large pot heat up several tablespoons of oil over medium high heat.  I would say 4 Tbls. probably.  When the pan is good and hot, take your beef cubes that you have rolled around in your seasoned flour, a piece at a time, and shake off the excess flour.  Then put them in the oil. Don't crowd the beef.  You want to cook the beef in batches, the reason for this, is you want your beef to brown and get awesome, not steam it which is what you'll do if you put the entire batch in at once.  Brown each piece, more or less, on all sides.  When browned, remove to a plate.  Finish browning all the beef.  If you have to add a touch more oil to the pan, go ahead.

Notice all the browned goodness in the bottom? This is flavor.  Add some water to the bottom of your pan to prevent the browned stuff from burning.  Start filling the pot with ingredients.  Add the onion, carrots, celery, and browned meat.  Throw in a couple pieces of Parmesan rind. This is going to add some serious flavor and thicken the soup a bit.  You'll pull these out when cooking is done. Throw in your pieces of pepper and  your beans and grains mix.  Add your tomato sauce and a few dashes of Worcestershire Sauce.  Now fill up the pot with the rest of the water.  Leave about 2 inches up at the top.  I would say, don't really season it with salt at this point.  Let it simmer for a bit and then taste it.  You don't want your soup to be too salty!!

Bring to a boil.  Then reduce the heat to low and let it simmer with the lid on and slightly ajar for about 2 1/2 hours, or until your beans are nice and tender. The bean package told me 1 1/2 hours...apparently I like my beans more tender than they do.  Make sure to check the seasoning level.  You don't want bland soup, but at the same time, you don't want soup that's too salty.  You want it just right.

Devour the tastiest soup ever!  Serve with The Best Drop Biscuits and you will be in bliss.  My husband swore his eternal devotion to me again last night over this supper.  It's always good to wield your power...but only for good!!!   Although, I would like to have a brand new sewing machine...  hmmmm... no, no.  Power for good, not evil. 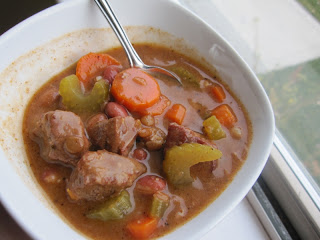 Also,
Check out what I'm writing
Posted by Heather @ The Beating Hearth at 8:25 AM 7 comments:

This blog uses cookies. If you choose to stay on this page or navigate this blog, you are hereby giving your consent to the use of cookies. Thanks!! 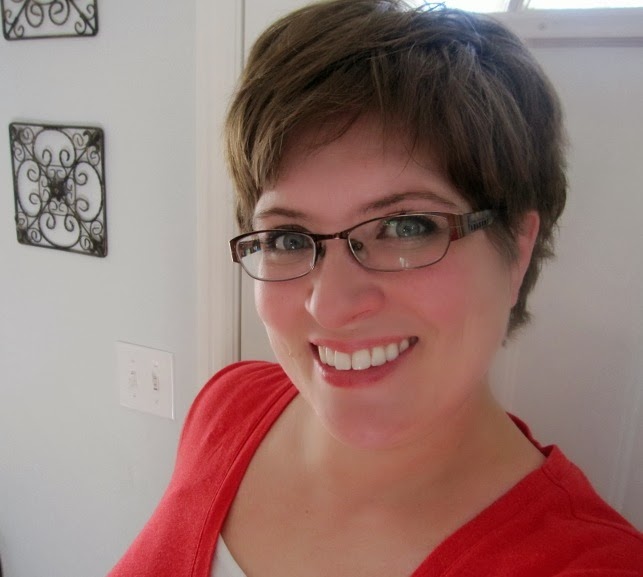 What's Hot in the Hearth...my most visited posts

Unless noted otherwise, all content created exclusively for www.beatinghearth.blogspot.com. Please limit external use to single image files or excerpts of 100 words or less. When using my photos or content, please cite my blog by name and include a direct link. Copying and pasting my posts will be seen as a copyright violation.This blog was created for entertainment purposes only. Use the information found here at your own risk.